What does baseball have to do with fatherhood? 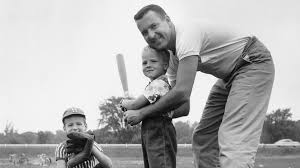 David E. Prince is the pastor of preaching and vision at Ashland Avenue Baptist Church and a professor of Christian preaching at the Southern Baptist Theological Seminary.

“Without fathers, there is no baseball, only football and basketball.” – Diana Schaub, National Affairs

Baseball is uniquely a sport that fathers pass on to their children.

When Willie Mays speaks of his dad teaching him how to walk when he was 6-months old by enticing him with a rolling baseball, he is telling the story of baseball. Atlanta Braves first baseman Freddie Freeman tells how his CPA father took a late lunch every single day so he could throw him batting practice after school. After 16 years in the big leagues, Chipper Jones headed home and had his mom video his swing so his dad could help him rebuild it. In historian Doris Kearns Goodwin’s memoir Wait Till Next Year, she explains the formative role her father’s love of baseball had on her life and career pursuits, “By the time I had mastered the art of scorekeeping, a lasting bond had been forged among my father, baseball, and me . . . These nightly recounting of the Dodgers’ progress provided my first lessons in the narrative art.”

A game that’s taught, not caught

No child will love and pass down the game of baseball simply because someone bought him a glove, ball and bat. He cannot play catch with himself, hit himself ground balls or throw himself batting practice. No child will figure out on their own what in the world a suicide squeeze, sacrifice, infield fly, frozen rope, Texas leaguer or balk means. The mechanics, mystery, nuance and jargon of baseball demand that one has to be personally discipled in its craft and patiently taught its glories. A baseball scorebook resembles mysterious hieroglyphics until the signs and symbols are patiently given meaning by a learned tutor. Very little in baseball is seeker-friendly or self-evident, and few people pick up the game on their own.

Almost no one ever develops a passionate love for baseball as an adult (my wife being a glorious exception). That is not the way the game works. Baseball is a game full of subtleties, which are passed on through generations like a treasured family heirloom. Baseball demands the daily attentiveness of its zealous followers in a consistent and rhythmic sort of way. When columnist Thomas Boswell asserts, “Conversation is the blood of baseball,” he is describing the warp and woof of its distinctiveness (How Life Imitates the World Series). As famed Orioles manager Earl Weaver once quipped, “This ain’t football. We do this every day.” Football and basketball are sports of athleticism and can be peer oriented, but baseball uniquely remains a sport of persistence and usually demands a father’s involvement and investment. In almost every case when a Major League Baseball player is asked, “How did you develop a love for the game?” his first words are, “My dad.”

My passion and love for the game began with my dad placing a baseball in my crib. It grew with countless conversations and times of catch, ground balls and batting practice with my father. The makeshift pitching mound in my backyard and the red clay of the little Dixie Youth Baseball Park, Joe Marshall Field in Montgomery, Ala., will always be more sacred to me than Fenway or any other big league park. As we picked up balls after another round batting practice, the conversations between father and son helped usher me from boyhood to manhood.

George Will explains, “Baseball, it is said, is only a game. True. And the Grand Canyon is only a hole in Arizona.” Jon Meacham asserts, “To wave off baseball as ‘just a game’ is like referring to the global events of 1939-1945 as ‘just a war.’” These serious cultural thinkers understand that baseball, a constant in American life since the 1850’s, has been the quintessentially American game and a significant culture reflecting and shaping institution. Branch Rickey wrote in The American Diamond, “It is almost impossible to find any team sport that so critically and clearly tests the mettle of each man alone on almost every play and yet fuses them all together into a group working in team competition. That is the paradox of this game that makes it so well suited to the American temperament.”

Baseball requires a kind of individual moral courage that keeps persisting for the good of the team in the face of inevitable repeated personal failures. The national game reflected the national character in a way that uniquely embedded it in the American family experience. Fathers naturally related the daily and rhythmic narrative of baseball to the narrative of life as they reared children.

But, I fear baseball is becoming “just a game” in the American experience because fatherhood is in decline. The youth baseball experience is being abstracted from the family and professionalized in contemporary American culture. Absentee fathers have led to the cultural decline of baseball as the national pastime in America. But it must be noted that there are varying kinds of absentee fathers. Some tragically do not live in the home with their children, but others are in the home but hire or farm out much of the parenting. Even in Christian families, providing stuff and paying for opportunities is often counted as engaged parental involvement because we have lost a theology of presence.

The emergence of baseball academies, specialized paid instructors, and travel baseball teams is a symptom of a larger cultural problem. All of these opportunities can be helpful and have a place as a supplement to a player’s baseball development, but they too often become substitutes for what has made the game of baseball great and deeply entrenched in American culture.

Every time I see a father fiddling with his iPhone while paying another man $40 an hour to sit a ball on a tee or soft toss for his son, I realize we are losing the game. Baseball is a game enamored with history and conversation, which have linked generations with a connectedness and shared language. The familial rootedness of baseball contributed to its emergence as the national pastime, and the hectic, virtual world we inhabit today makes its value largely unintelligible. Our industrialized, mass production culture has led to an unthinking value of quick, cheap, and disposable over slow, valuable, and lasting. The downgrade is evident in the range of American performing arts—including sport.

Severing baseball from fathers and local communities is turning the great game into “just a game.” Any American father can be privy to a wealth of resources in books and on the Internet about the fundamentals of baseball that is unparalleled in history. With minimal effort, he can learn drills and patiently work with his son on a daily basis to learn and develop the needed skills. But, it seems many dads would rather pay $40 and be an absentee dad for the instructional hour.

After all, the baseball academies and instructors dangle the possibility of obtaining a college scholarship or a Major League Baseball career if you sign up for their professional lessons. Baseball’s value is corrupted when it is simply seen as a possible means to some utilitarian end. Such notions are fantasy any way. Only two percent of High School baseball players receive any scholarship money to play baseball in college. A family’s time would be more wisely invested by trying to hit it big in the lottery (which I do not recommend).

A father’s presence and the gospel

Absentee dads, whether physically absent or emotionally absent, will not hand down a love and passion for baseball. A father who refuses to take the time to teach a game like baseball that demands patience will probably not take time for other complex and mysterious things either—far more important things.

It is not just baseball that demands a father’s presence. The good news of Jesus Christ is a simple yet infinitely profound message. The Bible takes us through the most important story in the history of the cosmos. The biblical gospel story has all kinds of twists and turns, nuances, and mystery (Eph. 3:3-10; 5:32; Col. 1:26-27). It is the story that defines every one of our personal stories. Passing on “the faith once for all delivered to the saints” (Jude 3) to the next generation takes time, patience, and never-ending conversations (Deut. 6:4-9; Psalm 78:1-8) about “the mystery of the gospel” (Eph. 6:19).

Just like the dad dropping his son off with the baseball professionals, too many Christian fathers act as if they do not have time to read the long complex story of the Bible and have countless conversations with their children about the gospel and biblical truth. It is much easier and efficient to drop them off and allow the professionals at the church with seminary degrees to take care of serious religious stuff. Too many dads think what really matters is paying for their children to have the best opportunities and college one day. They tend to prefer the gospel tract approach to teaching faith and life, just the facts, hopefully get them saved, and make sure they get a good education and well paying job. But, in a faith with a Savior who took on human flesh and dwelt among us, we ought to know better. Faithfully teaching our children about the glory of the incarnate, crucified, and resurrected Christ demands time, patience, and presence.

Without fathers, there is no baseball—and unfortunately, that is one of the smallest tragedies of absentee dads. There is a reason grown men have often cried when Field of Dreams ends with Ray playing catch with his dad. But I fear we are heading toward a time when many men will be unmoved and puzzled by what they see as a strange ending to the movie. If so, we will have lost far more than baseball.